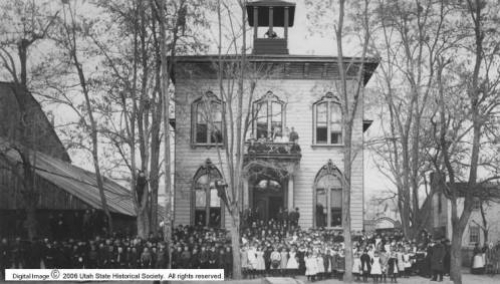 It was a bold move. Only Episcopalians would think of opening a school in a bowling alley. Bishop Daniel Sylvester Tuttle, barely 30 years old, arrived in Salt Lake City in July of 1867. In October of 1866, the House of Bishops had named Tuttle the Episcopal Bishop for the Montana, Utah, and Idaho Territories, an area of over 340,000 square miles, much of it accessible only by horseback. Only days before Tuttle’s arrival, two Episcopal missionaries, Thomas W. Haskins and George L. Foote, who had only been in Utah several months, had enrolled sixteen students in their grammar school which was housed in an old bowling alley. The owner of the bowling alley, a previous army surgeon associated with Fort Douglas, had recently been beaten and shot to death outside his home, purportedly because of a conflict over disputed property. Brigham Young’s notorious hit man Porter Rockwell may have been responsible for his murder. Tensions between Mormons and non-Mormons ran high in those days.

The Mormons, having been established in Salt Lake City a mere 18 years, still acted as if on the defensive after having been driven from Illinois by discrimination and violence in 1847. Their tenuous hold on the territory of Deseret was also threatened by the United States Army which perched above the city at Fort Douglas and trained its cannons on the inhabitants below. Haskins and Foote, more sensitive as Episcopalians than some of the previous non-Mormon religious leaders such as Congregationalist chaplain Reverend Norman McLeod at Fort Douglas, who had made their presence felt in a hostile and confrontational manner, made a point to appear unthreatening. They described the purpose of their first service as “not to antagonize evil by direct assault, but to plant and maintain positive good.”[1] Instead, they “sought to win the judgement, the conscience, the affection, the respect and allegiance of men, whether Gentiles, apostate Mormons or Mormon, by putting into competition with Mormon doctrine and practices the faith and practice of the Church, saying not a single word against the Mormons.” [2] The “Church,” in this case, refers to the Episcopal Church.

Despite its inauspicious beginnings, the bowling alley school managed to double its enrollment within a week and triple it by the end of its first year. While the Mormon leadership was dedicated to the education of its members in order for its missionaries to be able to proselytize, Mormon schools met in the LDS meetinghouses and most of the learning centered on Mormon philosophy. Thus, the Episcopal school offered an attractive alternative for non-Mormon families interested in a more traditionally academic and less religiously driven curriculum. In fact, the school represented competition for the LDS church organized schools as many Mormon parents sent their children to St. Mark’s Grammar School, perhaps feeling they could reinforce LDS doctrine well enough at home and that their children could benefit from the straightforward academics.

Swiftly outgrowing the bowling alley space, the school moved to a store on the corner of Groesbeck Block on Main Street and 2nd South owned by Nicholas Groesbeck, a prominent Mormon convert who later built the Wasatch building. Groesbeck charged forty dollars a month for the students to squeeze into two storerooms. Although most communities had options for schoolchildren, territorial attendance averaged only 40 percent in 1866 with an even lower average of 33 percent in Salt Lake County.

Returning to Salt Lake in 1869 after two years on the road in Montana and Idaho, Bishop Tuttle, a former teacher at a prep school connected to Columbia University and a fanatic about education, set out to establish a more appropriate learning space for the educational needs of the Territories’ growing school-age population. “The Episcopal Church,” reflected Haskins, presumably referring to the Bishop, “considers education as the chief handmaid of religion.” Recognizing that the low tuition rates and generous scholarships offered to poor students, over five hundred scholarships up until 1886, would not touch the cost of constructing a school, Tuttle used his connections to reach out to wealthy donors in the east who found the cause of educating youngsters growing up in a literal and figurative wilderness worth supporting.

Thus, in 1873 the St. Mark’s Boys’ School on First South opposite the City Hall east of State Street welcomed male students to the new building. Girls, who had previously attended alongside the boys in the bowling alley and storerooms at Groesbeck’s, were relegated to the St. Mark’s Girls’ School in the basement of the Episcopal Cathedral of St. Mark’s on 200 East and 100 South. Eventually, the girls’ school was absorbed into Rowland Hall, a girls’ boarding school which opened in 1871 on “A” Street and First Avenue where the Madeleine Choir School is housed today. The Episcopal American Church Almanac and Year Book, in publication in the United States since 1830, listed 442 students at St. Mark’s School in 1886, “of these two-thirds are poor, and received free. The cost of each scholar is $40 per annum.”[3] Rowland Hall, the boarding school for girls, had 100 students, and three more Episcopal schools in Ogden, Plain City, and Logan provided educational alternatives for students outside of Salt Lake City.[4]  Beyond the Episcopal schools, Catholic schools and other parochial schools sprang up across the Territory as more non-Mormons established a foothold in the region. Education became a significant venue for the ongoing tension that existed between the dominant religion and those of different faiths.

The community building work of Bishop Tuttle and the successes of the Episcopal school system in Utah Territory did not go unnoticed by the still wary U.S. federal government. In 1869, then Secretary of State William H. Seward recognized the Episcopal Church’s accomplishments when he remarked, “the schools undertaken by the Episcopal Church in Salt Lake City would do more to solve the Mormon problem than the army and Congress of the United States combined” (Utah Historical Quarterly 373). 1886 found 763 students in attendance in the Episcopal school system in Utah with over 3,186 boys and girls having attended either St. Mark’s School or Rowland Hall since the bowling alley years. Despite its popularity and efficacy, St. Mark’s Boys School, along with many other private parochial schools that had grown up over the decades, chose to close its doors after the Territory became a state with mandated free public education in 1896. Today, with the ever-expanding population, Salt Lake offers a wide variety of parochial, private, and charter schools that cater to the more diverse religious citizenry. While Rowland Hall still thrives as an independent, co-ed, college prep school, only photographs of the original St. Mark’s remain as Bishop Tuttle’s legacy.