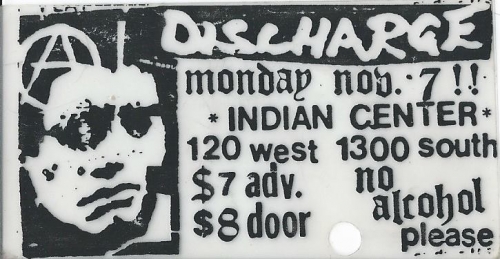 I don't remember the first hard core show I saw at the Indian Walk-In Center, but I do remember walking13 long city blocks down State Street once to get there. A fellow BYU student and I had just been dropped off near Temple Square, and we needed to get to the Indian Center badly. The band we were seeing might have been 45 Grave, exotic Californians, who were rumored to have Mormon connections that they lampooned in their cover of a Primary song. Or maybe The Nig-Heist, whose singer taunted the audience so relentlessly, the band was pelted with crap culled from the Center's scuffed wood floors.

We had to remind ourselves that the Indian Walk-In Center primarily functioned as a community center for the area's Native American population. Just off of dreary sun-bleached State Street, it was both cozy—resembling a pioneer house with its peaked roof and brick work—and capacious: inside its ceilings reached heaven ward. The windows were generous, large enough to hurl a P.A. through.

Primarily consisting one big room, the space easily contained the capacity crowds of mostly under-aged kids who crowded the floor for performances by the iconic Black Flag, Husker Du, the Meat Puppets—now legendary bands, who back in the mid '80s were grateful to be playing anywhere. Locals like the Massacre Guys, the Potato Heads, Stench, and LDS got to open for these bands. Sometimes they headlined their own Indian Center shows. For a brief period, I dated, in the loose style of an inexperienced Mormon girl, a member of the mostly Provo residing Bad Yodelers. For awhile, my '74 Chevy Nova was always headed there, northward on I-15. I was sometimes lucky enough to be transporting a member of the band. I am with the band . . . kind of, I often thought, guiding my car with steely concentration around the Point of the Mountain, the state prison arrayed on the left. Not far now. Once in the parking lot, I felt compelled to "pay back" the band members for gracing me, helping them lug their equipment from a van and/or my trunk onto the Indian Center's low rise stage. It was the least an ersatz girlfriend could do, wasn't it? I really had no idea.

One thing I did know--the Indian Center always smelled faintly of vomit and stale cigarettes. It was a smell I rarely got to experience in Provo, a place still without its own equally vigorously used music venue. I blamed the punks for the smell, and not the grown-ups and families who used the place during daylight hours. Nights, the Indian Center was the setting for heavy rebelling, although as an Honor Code-abiding BYU student, I was oblivious to a most of it. When the members of the English band Discharge—politely sweeping the floor after their gig—invited a gaggle of us BYU girls back for a lovely party at their hotel, we briskly walked back to our cars, a little bit frightened, which was the point of showing up at the Indian Center in the first place.

Still, we law abiding Mormon kids considered the Indian Center a place of worship, a depraved parallel to the one downtown, the one my parents had married in and the one to which we all were supposed to aspire. At the Indian Center, rites and rituals took the form of slam dancing and stage diving. And in those fleeting semesters of youth, that was perfectly fine with us.