This Was the Place: Bill and Nada’s 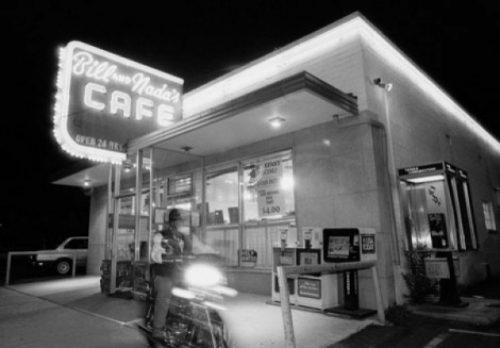 The pancakes were the color of butter and golden egg yolks. They served brains and eggs. I am not speaking from experience, but I imagine there was no better place if you wanted to make sure you would not be hung over in the morning, or, if you were hung over and you wanted to no longer be hung over.

The service was exactly as you would expect it to be. There were women in uniforms, which looked like they had been ordered in the fifties. The women's hair was from the fifties also, backcombed and hairsprayed and staying stiffly in place, no matter what. These women, they did not smile, and they took no guff from you or anyone else. But they took your order and they brought you more coffee.

Each booth had its own little juke box which played songs for only one nickel. I can't exactly recall, but I want to say that we always played Johnny Cash. It seems right that it be only Johnny Cash, but I remember that the juke boxes had plenty of songs I didn't recognize.

The placemats were the ordinary placemats with the Presidents, and when we went there I always tried to quiz myself on the order and the names of the obscure Presidents, and no matter what I was always disappointed at my complete lack of Presidential knowledge.

We could walk to Bill and Nada's from our house, which was about two and a half blocks away. I will say it, since everyone is thinking it: their food was not great. It was not terrible, it was not fantastic, it was fine. It was maybe even good. I am thinking now about the pancakes which, as I said, were mostly butter. But also there was bacon, which is also always at least good. Add coffee. See what I mean?

We would walk there on a Saturday or a Sunday, or maybe we went after we were done drinking cheap beer at Junior's. Or we just thought, hey, it's there. I regret I never got the brains and eggs, because now I know I never will. Never.

I remember the fantastic urgency with which Bill and Nada's was closed and then torn down. Torn down! Destroyed! The sign and all the bricks and the paint. Gone. I like to think that someone bought the sign and has it in a basement somewhere or in a garage, and when we most need it, when we think all the small diners and bacon grease and adequate coffee are gone, when we think the women with permanent hair cones and bad attitudes are lost to us forever, then someone will bring that sign back and just hang it up in front of their house, and like the North Star, the neon sign will give us hope, some sense of direction, will indicate to us that all is not lost, in the way that Bill and Nada's is lost.