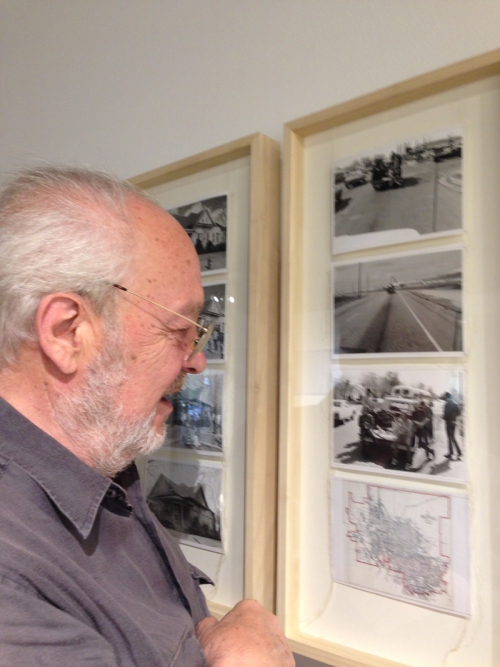 Italian architect Gianni Pettena returned to Salt Lake City in 2013 for the first time in over forty years upon the occasion of an exhibition of his work at the Utah Museum of Contemporary Art. Pettena was a visiting professor in the Department of Architecture at the University of Utah in 1972, invited to join the faculty for one semester by Robert Bliss, then chair of the department.

Pettena created three works during his time in Salt Lake City, since dubbed the "Salt Lake Trilogy." This photograph shows Pettena explaining his work "Seige (A Red Line)," wherein he and a group of his students took an existing map of Salt Lake City and painted the boundary streets of the city with a red line. This took obtaining permits, which Pettena readily procured. Of course they were only able to paint the line if it was possible to follow the city's border by car, so the actual map of the city was not realized.

As Pettena recounted the experience of painting this line during a public talk at UMoCA on July 5, 2013 - literally a red border - he mentioned the police waiting for him along the northern section of Salt Lake City. After the group was stopped and permits were shown, they were allowed to proceed. Robert Bliss recounted that during the whole event, the only public comment made regarding this action was from the governor's office: they questioned the use of the color red. Pettena felt the color red was a way to emphasize that artists could be activists and help to break down borders, by emphasizing them through this monumental gesture.

The red line, created from water-based paint, eventually disappeared, becoming a statement that exists now in memory, maps, and documentation.