Samuel Newhouse purchased the Highland Boy in the Bingham District of Utah, now part of the Kennecott Copper Mine, in 1896, believing he had bought a low-grade gold mine. But Newhouse didn't end up owning the kind of mine he'd expected. Though he struck one of the richest copper deposits known to the world at the time, he didn't realize its worth, covered up the copper deposit, and kept searching for gold. The Deseret News reported on January 13, 1900, in an article titled "Money in Sugar and Gold," that when Newhouse finally realized the worth of all that copper he "capitalized that mine at $12,000,000 in $1 shares and sold it to Eastern parties."

In 1908 Newhouse donated property at 39 Exchange Place in Salt Lake City for a stock exchange building. He wanted to give back to the state whose copper rich property had made him into such a wealthy and successful businessman. Obviously, financial motivations spurred his interest in Salt Lake as well. Utah's mining industry had grown rapidly at the end of the 19th century and Newhouse hoped to benefit from this growth and, with the help of his own capital, shape Salt Lake into the business and financial center of the West. Beside the new Salt Lake Stock and Mining Exchange at Exchange Place stood the city's first skyscrapers, the Newhouse and Boston Buildings, both erected by Newhouse. Newhouse also donated land for the Commercial Club Building on Exchange Place, constructed a hotel on 400 South and Main, and made plans for a theater and two more business buildings.

Newhouse wasn't alone in seeing Salt Lake's potential. In an August 11, 1909 Deseret News article, "The City of Unrivalled Opportunities," the paper had the foresight to predict that, "remarkable as the growth of Seattle, Los Angeles and Denver has been, Salt Lake is going to catch up to them. It cannot be otherwise." Such a notion, unimaginable from Salt Lake's contemporary perspective inside the "otherwise," was surely inspired by the robust mining industries of the west and, more actively, by the efforts of businessmen like Newhouse. Even those rowdy Socialists at the Federation of Labor Hall around the corner at 400 South and State Street couldn't prevent Newhouse and the Salt Lake Stock and Mining Exchange from thriving.

The Exchange remained strong until a recession following World War I and, though it experienced a large volume of trading in the 1920s, it suffered the ills of the Great Depression. After a stagnant period, the 1950s uranium boom spurred a rebirth for the Salt Lake Stock and Mining Exchange. In 1954, uranium stock caused a "speculative fever" in Salt Lake so strong that, as Raymond and Samuel W. Taylor write in their book Uranium Fever, Salt Lake City "became the gambling capital of the world." During the height of the fever, "there were more shares traded over the counter in Salt Lake in a day than were handled by the New York Stock Exchange."i

After the uranium boom, the Salt Lake Stock and Mining Exchange quieted down. It became the Intermountain Stock Exchange in May 1972, but a few years later in 1979 the exchange facilitated its final trade. Today the building remains vacant. And though for a time Salt Lake was somewhat of a business and financial center for the west, Exchange Place never grew much larger than it was when the Exchange building was built, the city didn't maintain its speculation fame as a "gambling capital," and it never outgrew Seattle, Los Angeles, and probably not Denver. Samuel Newhouse might have overestimated Salt Lake's potential as a rich vein of undiscovered financial and business potential. But maybe he simply overlooked the actual value of the city he had adopted as his home. 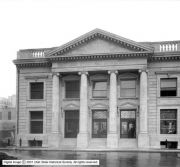 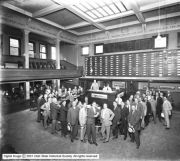