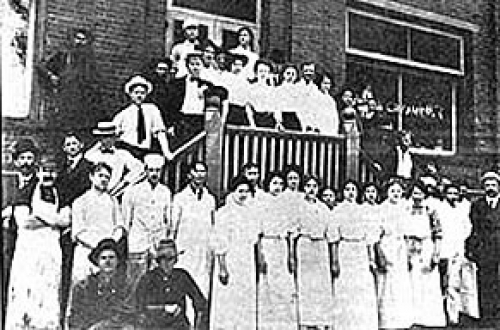 Many of the early immigrants that John Tobin looked to lure to the Bath House were likely Scandinavians, particularly Swedes. Due to an enormous missionary effort by Mormon leaders in  Sweden between 1860 and 1890 (and an equally large response), Swedes began flocking to Salt Lake in large numbers to be closer to the heart of their religion and to work in the mines, mills, smelters, and for the railroad, though many were recruited for work on the Salt Lake Temple because of the construction skills (Solt, 1). By the 1880s, Swedes comprised 5.2% of Salt Lake County’s population (Moore, 324). Many of them, particularly those working for the railroad or for the Utah Sand and Gravel Company in the hills north of Warm Springs, began a small settlement just north of the springs a few blocks from the railroad corridor.

I remember my father telling me about Swede town as we’d drive north on Beck Street towards his yard tower. I tried to imagine what this meant. Aside from caricatures on television and in other pop culture, I had little idea how a Swede looked or what differentiated them from anyone else, much less was a settlement of Swedish countrymen, from disparate parts of their homeland relocated into a somewhat isolated part of Mormon Zion, would look like.  In reality, there was little to distinguish it physically from other areas of Salt Lake City. Unlike other communities that arose in Salt Lake, such as Japan Town and Greek Town, who had non-Mormon churches and grocers or other gathering places that set their neighborhoods apart somewhat, Swede Town was largely made up of Mormon converts who were trying in many ways to assimilate. This succeeded in varying degrees. Though Mormon leaders pushed for Swedes to participate in English-language wards to facilitate the process, Swedish language and culture was kept alive in Swede Town and amongst Swedish settlements all over the state though Swedish-language newspapers such as Svenska Harolden, Utah Korrespondenten, and the Utah Posten as well the staging of Swedish plays and other cultural events. Many of these events and publications were born or staged in Swede Town (Moore, 1).

There are several small side streets running west off of Beck between approximately 1400 and 1600 West – in the latter portion of the nineteenth century, this was Swede Town. It was larger then,  but industry has encroached on the neighborhood and little exists besides Swede Town Park, an almost entirely forgotten (aside from the few residents still in the neighborhood) patch of green space on 1500 North and Swede Town Pub, a dive bar that sits on the corner of Everett and Beck that is connected to the original settlement in name only. Most of the original homes were replaced in the early parts of the twentieth century and a number of these remain though, despite recent efforts by some to revitalize the area a bit, most are very rundown and reflect the a kind of neglect that blends well with the commercial and industrial areas around them.

It is easy to imagine it being far more lively in the late nineteenth and early twentieth centuries, during the “Swedish Rebellion” of 1903-1905, when Swedes fought the Mormon Church’s pushes for them to assimilate and their lumping of all Scandinavians into a single cultural group and “advocated for separate Swedish Latter-day Saint organization which might more effectively foster Swedish language, culture and heritage” (Moore, 1). Though their attempts were unsuccessful, the rebellion points to a willingness to agitate in the Swedes, a characteristic that would become all the more important in the early portions of the twentieth century as labor unions and parties became more and more prominent in Utah and labor disputes became more heated. Swedes were some of the earliest immigrants to work in the mines and other industries and were typically more inclined to join labor efforts. Such efforts were all the more reinforced by the presence of Joe Hill, a Swede himself (he was born Joel Hagglund), in Salt Lake and Summit counties prior to his conviction and execution at the Utah State Prison on murder charges that remain dubious and controversial a hundred years later. Hill was likely the most famous labor organizer in American history and his presence in Salt Lake further emboldened his countrymen while his trial and execution outraged them and galvanized their efforts.

Second and third generation Swedes born in the Swede Town area were no different than the children and grandchildren of other immigrant groups in that they often found themselves torn between two cultures and at odds with the values, religious, ethnic, or otherwise, that led the previous  generation to make the move to the United States. This tension bred both closeness in these American- born Swedes, particularly the sons, and a tendency to find themselves in trouble with both the authorities and their parents or grandparents. In the case of Swede Town, a group of about 45 young men who had grown up together in the neighborhood during the 1910s were a perpetual source of consternation for other residents, as they were chased from site to site, including the Swede Town store and the local ward house, due to complaints of profane language, vandalism, and loitering. Eventually, the neighborhood came upon a unique solution to the problem that led to one of the great, if not utterly forgotten, landmarks in the Beck Street area.

Rather than continue to chase the boys off or get law enforcement involved, the neighborhood agreed to provide the land and the materials for the boys to build their own gathering place. An empty lot on the opposite corner from ward house was given to the group, along with materials recycled from the nearby rail yard. Within a few hours the boys had built a structure resembling a large pavilion that they christened the “Grizzly Inn” and inaugurated with an “eight-gallon keg of beer.” While the Grizzly Inn provided an immediate solution to the issue at hand, several problems remained. As it was an open- air structure, it did little to deter the noise from the boys’ late-night, and presumably drunken, get- togethers. Likewise, it was completely useless in the cold, Utah winters. On November 1st, 1916, three of the more precocious member of the group – Ernest Apelgren, Earl Vincent, and Hyrum Bergstrom – commandeered a small nearby empty lot and, with the help of their peers, began work on their new winter quarters.

Like the Grizzly Inn, the new building, which would come to be called “The Indian Grove,” was crude, though it was enclosed and provided a cozy space for the men to meet. It was also constructed from recycled materials and “was built of railroad ties planted upright, with rail car doors nailed to them making the walls and roof, and the roof covered with six inches of sod…A bench was built around all four walls…[the] interior included many pictures of baseball players and others, a stove and carpet (Solt, 1). The structure was completed on December 21st, 1916 and another eight-gallon keg was on-hand for the opening celebrations. However, as if to illustrate the working conditions many of these young men  faced, and that their parents had fought against, one of three leaders of the group, Ernest Apelgren, was killed in an accident earlier that day and the celebration soon turned into a wake (Anon, 2). In spite of this loss, the Indian Grove quickly became a fixture for young men in the area. Early the following summer, the Grizzly Inn was relocated from its original plot to land adjacent to the Indian Grove so the group could entertain outdoors as well. 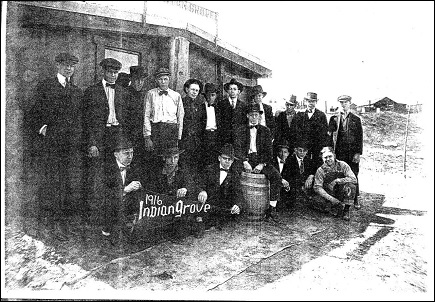 Curiosity from outsiders regarding the clubhouse was met with openness by the young men who gathered there and, despite its reputation as a degenerate dive, the boys often held public events at the Indian Grove and even held occasional “ladies’ nights” so that “the fairer sex of the Ward [could] view the boys’ new quarters and investigate their motives” (Anon, 3).  In addition, during the winter months, two nights a week were devoted to “the study of the Science of Eugenics,” while other discussions were made open to the public on a wide array of topics. The Indian Grove remained an important facet of the community into the 1930s and illustrates how the northern fringe of the city maintained a more colorful atmosphere throughout its history when compared to the more staid, Mormon city a few blocks to the south. Given the role of alcohol in much of the entertainment to be found at the Indian Grove, Prohibition likely took a serious toll on the establishment. Though nothing of the structures now remain, a few pamphlets and other ephemera still exist including rosters of the Grove’s members, which document a long list of Swedish family lines, including Skoglund, Anderson, Bergstrom, and more, that quickly wove themselves into the fabric of the city.

Swedes and other Scandinavians were not the only ethnic minority to settle in the Beck Street area as a result of Mormon missionary efforts. Missionary work in Hawaii began within a few years of settlement in the Salt Lake Valley. The first ten missionaries departed San Francisco for the islands in 1850 and by 1854, a colony for Hawaiian Mormons was established on the island of Lana’i (Bureau, 7). Strict regulations prevented the emigration of converts for nearly two decades. In the mid-1870s, a  small group of Hawaiians returned with missionaries to Salt Lake City, including J.W. Kauleinamoku, who trained as a carpenter and began work on the Temple Block. Church leaders provided him with land in the 19th ward where he built a home near Beck’s Warm Springs (Jackson, 318). Despite being amongst the first non-whites to work on the Temple Block, Kauleinamoku’s racial status was a liability. The same held true for other Hawaiians who followed him. By the late 1880s, there were approximately 75 Hawaiians living in the Warm Springs area and while they, like many others, believed the springs possessed healing properties, it is clear that like the Scandinavian groups who had been slower to assimilate, their placement on the fringes of the city, in an area “known for its miasmatic swamps, heavy industry, and run-down immigrant shanties” was a less than benevolent gesture (Cater, 10-11).

In addition to racial, linguistic, and cultural barriers, Cater argues that Hawaiians and others faced an additional obstacle in the form of views white Utahans held in regards to the medical condition and “devolution” of Polynesians. In addition to outright racism, these views were perpetuated by the prevalence of leprosy and other diseases that had become relatively rare in many Western countries.

While many Mormons tended to take a softer approach with the Polynesian converts – due partly to Mormon belief in “the gathering of Zion” or the notion that Native American and Polynesians, among others, constitute portion of the Lost Tribes of Israel – gentiles in Salt Lake were decidedly less pleased about the increasing population of Hawaiians in the city. To them, “Kanakas appeared to be filthy and contaminated with leprosy, a fundamentally ‘un-American’ disease…they also seemed to signal Mormon domination in Salt Lake City, the territorial capitol…[and] the Catholic-owned Salt Lake Tribune editorialized that kanakas were…similar to ‘blacks’ or ‘niggers,’ and legally unfit for naturalization” (17). Within a few years, such attitudes held sway and church officials agreed to relocate the Hawaiian colony from Warm Springs seventy miles west to an isolated desert colony that would become Iosepa, the Hawaiian translation of ‘Joseph.’