One World: Everybody Eats 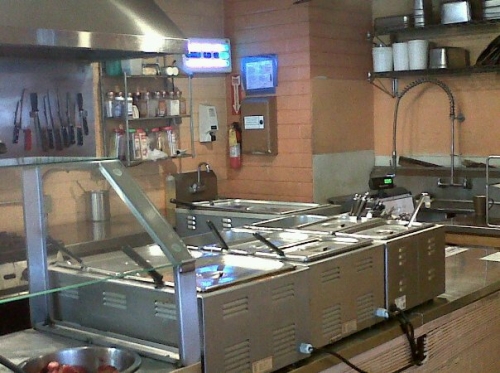 I had no I I had culinary experience. I had no experience in management. I did have two hands, two feet, a conscience, an able body, an admirable work ethic, a longstanding desire to try to ameliorate, on some level, the injustices of this world: a seemingly inexhaustible stamina which is all but gone from me now, and was admittedly, part of a more idealistic personality than I possess today.  I had come there, myself in desperate need, as a dishwasher, at a time when the place was nearing its closure, after close to seven years, operating to serve others in need: students, the  homeless, the unemployed. The first of its kind in Salt Lake, a pay-what-you-can restaurant, which drew people from all economic strata, while relying on donations for daily operations in order to provide, for those unable to pay, a basic staple of rice and beans, while serving locally-sourced organic and free-range foods. A simple structure, three stories high, with a then-unknowingly mold-ridden apartment above it. The café’s basement had housed, at various times, one or another homeless person, a thrift shop, and additional seating.  The walls were obviously painted by amateurs, coarse tile which trapped grease and soil covered the floor, red brick dressed the exterior walls. Where once there was a fence decorated with climbing-vines, now a street-art mural of submarine scenery stood at back of the building.

When I arrived, there had been a recent walkout due to the nonpayment of, I guesstimate, half a dozen employees, and to my knowledge these individuals never received payment. Upon leaving, I faced the same scenario: nonpayment of back-wages, and unemployment without insurance. This place, unlike many nonprofits, received no aide in the form of government or private grants, but was funded, entirely, by patrons.  A friend had referred me after I had become unemployed, while I was studying at Salt Lake Community College. Due to budgetary difficulties, very soon after my employment began, much of the other staff was laid off, until, eventually, I was the only one remaining, and under the pressure of increased need for my labor, I soon left school, and began working more and more for shrinking pay.

In a currently abandoned building, it was situated between The Utah College of Massage Therapy, and a random apartment building, in Salt Lake City, Utah, and had become an institution amongst “Progressive Types” in the community. (Though I can’t remember how many times I noticed patrons scoffing at, or even blatantly questioning the integrity of the director for being A Muslim from Tunisia. He would often emphasize his maternal Italian heritage to assuage people, but ultimately, his spirituality and ethnicity became a point for distrust and suspicion from people who I would have thought might be more open-minded.) I was at its helm from open to close six to seven days a week for over two years, the only paid employee, and a close second to The Director there for over two years.

My memories of this place, among others, and the people who filed in and out, seem to melt into and discolor each other; I have so many fond memories of it, while others were destructive to my youthful sense of hope for a better world, and my lack of pragmatism. Often multi-tasking, I served as many as fifty people single handedly while short on supplies or ingredients, on some days, waiting in vain for paying customers; on others, opening and closing facilities, coordinating the efforts of volunteers. It was a wildly unpredictable job, but for me a defining position and place.

I remember late nights with volunteers, beers with coworkers, late nights and early mornings, public radio always streaming from speakers. My boss told me once, “I can see it,” when I told him I had a bit of Cherokee heritage, though I am pale and pink as can be. He seemed to want my friendship desperately, whenever we spoke. In this instance, he could see the color I did not have; the color he did have. He seemed to have a great deal of admiration for me, or else was pandering, trying to please me, to keep me at his beck and call. As noble as the cause there was, a great deal of manipulation occurred, and much unspoken tension resided in this place which so many had idealized for its lofty purpose.

I specifically recall nights filled with fire-dancers and musicians, a fundraiser where fine wine was served with filet-mignon to wealthy liberal patrons, after which the volunteer staff gathered and dined as a hula-hoop dancer performed, the occasional acoustic guitarist played on the patio. Once a beautiful young ballet dancer and volunteer gave me free tickets to her show while expressing how nervous she was, never having had any other type of job before. She also showed me a pretty poem she wrote. Many massage students starving under the weight of tuition and living expenses came to fill up on our basic staples, and large church groups, 20-50 at a time, happily dined and donated liberally there. I was once punched in the face by a vagrant wielding a kitchen knife who was rank with body odor.

One moment drawn from many, stands out just now: Thirty minutes to closing-time, the latest patron, just out of jail, not a penny in his pocket, stands before me, feeling the need to explain his situation, before asking for a cup of coffee, which I am shortly going to pour down the drain. I have no idea what he has done or why, but I understand what it is to be in need, and I know what remorse feels like. There are reasons for my particular struggle as well, many which are “Unspeakable,” so to speak. “It’s no trouble, sir,” I tell him. He seats himself, alone in the otherwise vacant café, at the very back. I am exhaustedly cleaning the facilities, properly cooling what remains of the day’s food stock, and eventually make my way back to him. He is passed out in a chair, and as much as I feel for him, and I have no Idea if he has anywhere to sleep, or shelter himself from a particularly icy, frigid twilight, I am forced to tell him to leave. After several requests and no response, I reluctantly nudge him with my finger: no response. I begin to get angry.  He is breathing.  He is alive. I am furious. He won’t wake up. I grab him, softly by the shoulder, and shake him, still he does not wake. I am livid. I scream, “You need to leave!” I want to go home. I call the police, and inform them, all the while, truly only concerned that I am exhausted after nearly two weeks straight of shifts of 12 hours or more, and the prospect of a long walk home, that there was a patron passed out here, who would not leave the premises.

When the authorities arrived, Emergency Services were dispatched. I was told that he had overdosed on heroin, and if I had called any later he’d probably be dead. In truth, as I found out later, this man simply had a seizure due to low-blood sugar, and it was merely the officers’ cynicism, a byproduct of their profession, that brought them to that assumption. The danger to him was just as pressing as a drug overdose though, and I am glad to have been there to intervene. Ultimately, I caved under the duress of my own poverty and left One World which quickly closed, though the founder later attempted to reopen it. Ultimately, however, the enterprise couldn’t sustain itself.