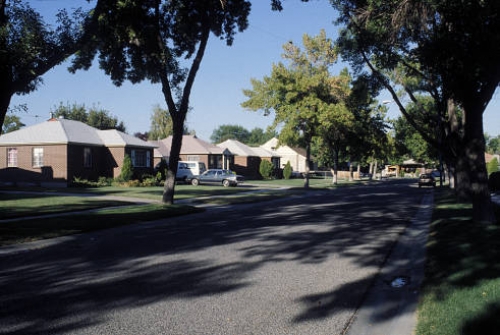 Rose Park University of Utah College of Architecture and Planning

The Rose Park neighborhood of Salt Lake is considered to be one of the most diverse areas of the city. Several historical factors have contributed to the community’s complex makeup. In the 1870s the railroad split Salt Lake and physically delineated the city’s west side. Railroad workers of various ethnicities, cultures, and religions settled into what is now the Rose Park area, transforming a part of Salt Lake that had been predominantly LDS into a more heterogeneous community. Then, in the 1980s and 90s Rose Park saw an influx of Pacific Islanders and Central and South Americans, a migration consisting largely of Mormon converts moving closer to their church’s headquarters in Salt Lake. During the 21st century Bosnian, Russian, Vietnamese, Cambodian, Sudanese and Somalian immigrants, many of whom are refugees, have made their homes in Rose Park. This complex and rich cultural, ethnic, and religious diversity has given Rose Park a reputation as a welcoming, community-oriented, and proud neighborhood.

But the area wasn’t always so welcoming or prideful of its diversity. Before being redeveloped and renamed as Rose Park the area was called the Oakley Park Subdivision, which was marketed as somewhat of a resort community. But the area consisted of marshes, slues and stinky springs really only fit for cattle. As developers prepared to take over and revitalize this undesirable land during the post-World War II housing boom they first ordered the health department to clean out a residential area that inspectors considered to be an unsanitary slum. Residents of the “blighted,” “depressed” area were to clean up or move out, and developers and inspectors were accused of “pushing people around.”1 And people continued to get pushed around during Rose Park’s heyday of expansion during the 1950s as the booming new development’s covenants only allowed white people to own homes in the area. This prejudice continued until immigration policies were loosened, a change that has allowed Rose Park to become the diverse community it is today.

Rose Park has also experienced an environmental transformation. From the 1930s until 1957 Utah Oil and Refining Company disposed of acidic waste sludge in an unlined pit that came to be known as the Rose Park Sludge Pit. In 1982 the US Army Corps of Engineers oversaw construction of a remedy that consisted of building a bentonite slurry wall around the sludge pit’s perimeter and capping the waste. The EPA deemed the site protective of human health and the environment and was deleted from the National Priorities List in 2003. The area is now known as Rosewood Park, and residents enjoy picnicking, playing soccer, and skating at what was once a Superfund site.2

From slums to sludge pits Rose Park has proven itself to be a resilient, adaptable, and community-minded neighborhood throughout its history. And it stands out in Salt Lake not just for its diversity and its history, but also for its physical differences from downtown. The railroad separated the area from the city in the 1870s, and that separation was more recently reinforced by the construction of the I-15 freeway, which is one of the community’s boundaries (west of I-15, north of 600 North, and east of Redwood Road). Even the neighborhood’s layout sets it apart from the rigid grid of downtown and its surroundings. Rose Park’s original developer, Alan E. Brockbank, designed some of the original streets to look like a rose from an aerial view. The story goes that Brockbank’s father was a gardener at Buckingham Palace, a fact that also inspired Brockbank the younger to name several streets for rose varieties, and, of course, inspired the development’s rosy moniker.

And apparently the layout and cultural diversity of the neighborhood have facilitated an exceptionally livable community. Rose Park suffers fairly widely held misconceptions about crime in the area, which is perhaps a symptom of its physical separation, its cultural, ethnic, and religious differences, or both. But the community belies such misplaced accusations. Its been suggested that the Latino population, taking advantage of the neighborhood’s layout and small scale, have imported a culture of more vibrant, walkable, community-oriented neighborhoods to Rose Park, a way of life that’s familiar in Latin American cities, and that’s becoming more familiar elsewhere (see the recent attempt at a walkable downtown development, City Creek Center).3

Salt Lake Telegram, 11/4/1948, “West Side Coming into Its Own, But Needs City Services and Facilities”