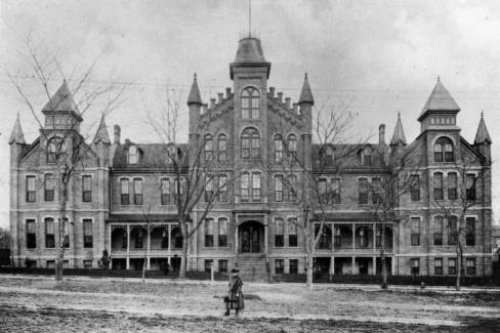 Though the type and severity of the cases varied, Mrs. Lorrenson is representative of the inmates at the Women’s Industrial Christian Home. The home on 145 South 500 East, which opened in 1889, was established and constructed with the support of the US Congress to provide young Mormon females with an “avenue of escape from polygamy and its attendant evils.” The home, while providing women with temporary shelter, also attempted to teach them skills they could use to support themselves and their families. These women would no longer have to depend on their husbands or the Mormon Church. Women of the Industrial Christian Home were instructed in domestic industries such as cooking, dressmaking, and tailoring; and in mechanical industries like typewriting, stenography, and telegraphy. Not surprisingly for the time, an escape from the evils of polygamy was not an escape from the confines of domesticity or an expansion of the narrow range of opportunities for women.

“The labor in the effort to lead these strangely deluded women into lives of self-dependency”2 was not quite as successful as the Women’s Industrial Christian Association had hoped. Though the association successfully petitioned for federal aid, it lost control of the home to a board of control comprised entirely of men who didn’t necessarily share the original vision of what the home should be. The board, headed by Governor Eli H. Murray, narrowly defined women’s eligibility for the home’s services, which may account for its failure. First wives, and women who refused to be a party to polygamy or a part of Mormonism, were denied aid because polygamy didn't technically affect them. The Women’s Industrial Christian Home, built as an escape from the abuses of Mormon polygamous patriarchy, failed in part because of governmental and bureaucratic patriarchy. Women in Utah lived at the mercy of men who claimed to be their protectors, both in and out of marital or religious structures.

After its closure some men in the legislature - exhibiting resilience in the face of their failed attempt to aid Salt Lake citizens in need - pushed to have the home appropriated for the Utah Legislature. The building’s “convenient and suitable halls and necessary committee rooms connected therewith,” could be had “free of rent or other expense, except to pay for gas to light the rooms used and coal to heat them.”3 So for a short time the Women’s Industrial Christian Home became the meeting place for the men of the legislature. After facilitating Utah’s representatives, the building was repurposed as the Fifth East Hotel, and later, in 1945, became the Ambassador Athletic Club. The Ambassador Club became a bit of a boy’s club, a place where members could conduct informal business, bowl, gamble, and, as Utah prohibited liquor by the drink at the time, a place where they could stash and drink their rum and gin. Built as a haven for the destitute women of Utah in 1885, the building was torn down in 1985, standing to indulge weary travelers, bowlers, gamblers, boozers and legislators for a century.

The Miscellaneous Documents of the House of Representatives for the Second Session of the Fifty-Second Congress 1892-’93., Washington: Government Printing Office, 1893. “Industrial Christian Home Association of Utah. Communication from the Utah Commissioners Transmitting Their Annual Report to Congress.” Office of the Utah Commission, Salt Lake City, Utah, October 25, 1892

Relations of Rescue: The Search for Female Moral Authority in the American West, 1874-1939, by Peggy Pascoe, Oxford University Press, 1990