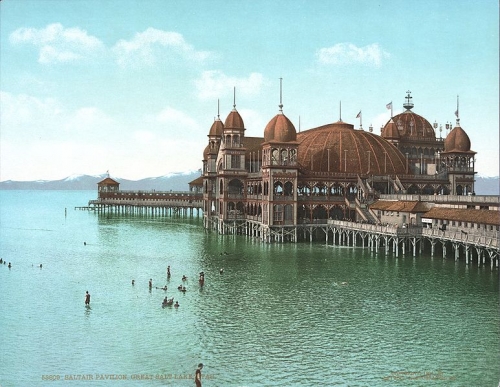 Ida Hunt Udall (1858-1915) was a devout Latter-Day Saint who became the second polygamous wife of David King Udall (1851-1938). She lived much of her life in relative seclusion because of her status, including several years on the "Mormon Underground," avoiding U.S. marshals.

The Mormon church officially renounced plural marriage in 1890. After that, Ida lived in rural eastern Arizona, separate from David Udall and his first wife and children. Her main companions were her six children and David's third plural wife, Mary Linton Morgan (the "Aunt Mary" of this letter), as well as Mary's three sons.

In 1905, Ida traveled to Utah for a rare visit with friends and relatives. In the letter excerpted here, she wrote to her daughter Pauline about visiting the church resort Saltair, on the shores of the Great Salt Lake, working in the Salt Lake Temple, and receiving support from other church members.

Your good letter of the 25th was reced last night and Aunt Marys good long one just a few days before. The very day I posted a long one to her answering all the questions she had asked, I believe except about the chickens. Tell Aunt M. that you and she are complete bosses of everything at home – to act in my stead. . .

I find my friends are legion. Now does not that fulfill Bro. Woodruffs promise to me and papa's blessing time & again, that the Lord would surely remember me and bless me? Sr Winder told me yesterday in the Temple, she never saw a woman with so many friends1. . . . Srs Woodruff-Cannon – Winder- Hyde – Aunt Mary Musser, & Susan Smith among the regular workers; and yesterday thro request of Uncle Lawrence my name was called off and I was let out before any one else2. He wished me to go to the Lake with their family party, which Aunt Loie and the little girls and I did. We enjoyed it immensely. . . . We went at four & returned at 8. Uncle Lawrence footing all my bills. We had bot a ticket for Aunt Loie but he had secured a pass for her too. We had a nice lunch together after our swim in the briny deep. O it is the loveliest treat I have enjoyed yet. If papa and all his train could go in together wouldent they enjoy it. . . .

On Tues afternoon I was the guest of Sister Winder out to Saltair which means she pays my way out & back, hires my bath suit and furnishes my dinner. . . . There were two gentlemen in our party, to my regret when we started, Bros Chamberlain & Margetts, but we had not been in long before I found they were very handy in learning Sister Udall how to float. They were both so kind and attentive to me I felt grateful to them, and last night I was quite independant of help. While promanading the pavilion at Saltair Sister Winder introduced me to Apostle Geo. A. Smith3. . . . He took off his hat and says, "Sister Udall I feel honored to meet you. I heard some of the prettiest things said about you the other day that I have heard for many a day." Well I was so abashed that Sr Winder answered for me, and told him it was true whatever he had heard.

The next morning we were walking to the Temple Pres Smiths coachman came along and asked us to ride so I have had a ride in the Prest carriage4. tell you these things daughter to comfort you and Aunt Mary in your lonely hard life at the ranche. To show you that people can live that way for years and still be remembered & honored. It will come your turn some day, just as sure as you keep the spirit of the Lord and the love of the gospel in your hearts. Kiss papa and all my boys for me.

God bless you all,
Your own Mama

Sources
The letters of Ida Hunt Udall are in the David King and Ida F. Hunt Udall Family Papers at Utah State University in Logan, Utah. They are part of the Ellsworth Collections.

Mormon Odyssey: The Story of Ida Hunt Udall, Plural Wife by Ida's granddaughter Maria S. Ellsworth tells the story of Ida's life through family documents, including her journal and other records.

Ida Hunt Udall had this photograph taken in Nephi, Utah, when she was traveling in July 1905, around the time this letter was written.

Saltair was built by the Mormon church in 1893. Today, the location has been renamed The Great Saltair and is used for concerts and other events.

2 That is, released from temple work earlier than the other women. The names Udall mentions are a roll call of prominent LDS women.

3 George A. Smith was an apostle in the LDS church and a counselor to Brigham Young. The town of St. George, Utah, is named after him.