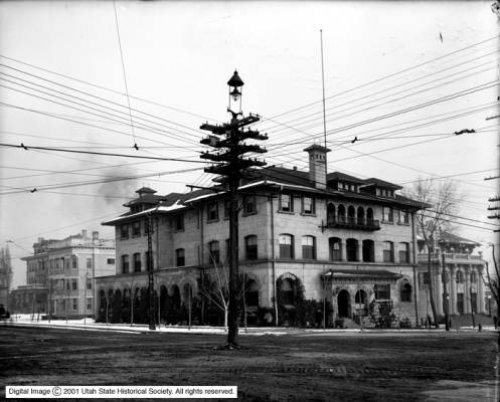 In the 1870s an elite breed of businessmen found a new home in the Utah territory. These men were elite, or quickly became so, because of the riches their businesses gained from mining the Utah earth. And with the arrival of these men a need arose for a space where such elite men could socialize and conduct business with one another. But their employees crowded the local saloons, which didn't really cater to their needs anyway, and the Mormon elite seemed to have already staked out the best places to congregate. The business leaders of Utah decided to found their own club and model it after gentlemen's clubs located back east and in England. On March 3, 1883, 81 charter members founded the Alta Club, named after the Alta mining district in Little Cottonwood Canyon.

The club was first housed at 21 West and 200 South in the Alta Block, but moved to the Dooly Block at the southwest corner of 200 South and West Temple in 1892. After nearly 6 years there, on June 1, 1898, the members moved into a new clubhouse, a building they commissioned on the southeast corner of South Temple and State Street. Located kitty corner from Temple Square, headquarters for the Mormon church, the Alta Club building became a parallel center in Salt Lake, a focal point for the city's non-Mormon hierarchy. Any divide between the Mormon and non-Mormon elite was never codified, and such division eventually disappeared as relationships developed between Mormon and Gentile members of the Alta Club. An initial lack of Mormon members may have been due to the smoky, card-playing, alcohol-consuming atmosphere of the club, but the separation was more likely a symptom of political difference. For the most part, though, the club learned to overlook religious and political differences in favor of business relations and men of the Mormon business community were frequently accepted as members.

Mormons may have been able to overcome their differences and join the Alta Club in its early years, but women had worse luck. For nearly a hundred years the club's membership remained a privilege reserved for men only. Wives and widows, though they couldn't become members, were allowed at the club, but their limited access to the building illustrated their difference. After the addition of an east wing, the main entrance of the Alta Club building was moved to South Temple and the former main entrance on State Street became the women's only guest entrance. In November 1985, Megan Peters filed suit against the club, claiming the ban on women members violated Civil Rights legislation. Peters' attorney, Brian Barnard, argued that the club was in violation of the Utah Civil Rights act because they held a state beer license. The club stopped serving beer and prepared to appeal but instead voted to allow women members amidst negative publicity and waning lunch, dinner, and meetings revenues. Deedee Corradini, a Chamber of Commerce executive and future mayor of Salt Lake City; Genevieve Atwood, Utah State Geologist; and Annette P. Cumming, a prominent local Democrat and philanthropist, became the first females given the privilege to sip beer and lunch with the gentlemen elite at the Alta Club.

Presumably the Alta Club didn't allow certain demographics to join because they hoped to maintain their club's elite status. In recent years, though, membership has waned because businesses have been relocating throughout the Salt Lake Valley, and more high class restaurants like The New Yorker and Metropolitan (now closed) have diverted the flood of elite lunchers in the city. The Alta Club has had to strike a balance between cultivating its image as a "refuge in the heart of the city," as their website states, and broadening its demographic to sustain membership numbers. The Alta Club remains a space for the Utah elite to meet and play, but the makeup of that elite has slowly transformed since the days of the mining boom. As Salt Lake and Utah evolve socially, politically, and culturally, the club evolves, becoming a more inclusive "refuge." 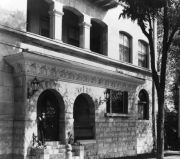 Alta Egos: Does Alta Club membership still have its privileges?
By John Blodgett