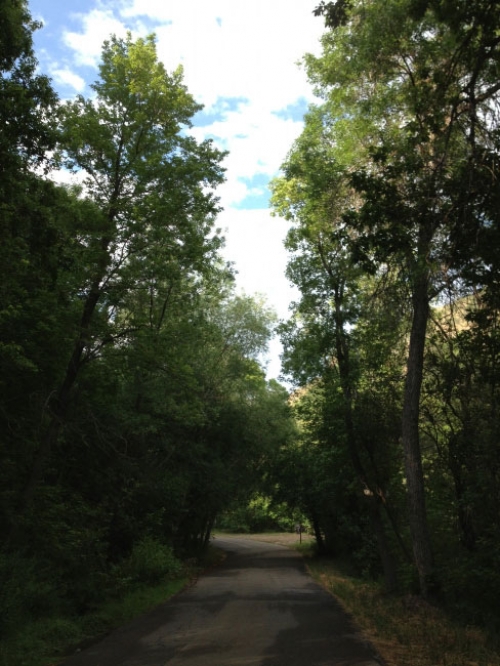 I remember the first time I went to Memory Grove at the entrance to City Creek canyon—with a group of creative writing students from Ogden High School—we had been to Pioneer Memorial Theatre and seen something entertaining, I can't remember what. What I do remember is the white stone sepulchers, the illuminated columns and marble pillars, utterly silent in a mist that had settled on the ground after dark—it had been a wet spring. My teacher felt compelled to show us the park because she was finishing up a short novel about the aftermath of World War I, told through the particular story of a young man who would never dance again. The impassive monuments probably put her in the right frame of mind. We drove all the way in past the last temple—this was before gates were put in, closing the canyon off to cars—and turned around at the edge of total darkness where the canyon really begins and the lawn gives way to near-wilderness.

That was twenty six years ago. Since then I have visited City Creek canyon many, many times, and still find it a little spooky at night, although that is when I have seen the great horned owl that probably lives there and likes to hoot from the top of the Cathedral of the Madeline on First Avenue. When I was younger I would jog up the canyon bottom at dawn several mornings a week to Bonneville Boulevard. One July, in the stillness that happens right before the sun rises on yet another 100-degree day, I came across a dog that was trotting along by himself near the rocky stream below the turn in the road. His tongue was lolling out and his open mouth seemed to be laughing. We looked at each other carefully for a moment, all the while still moving quickly past, and I said joyfully, "You're not a dog." That is the closest I've ever been to a coyote. I watched him bound up the grassy hillside without breaking stride, and then he was gone. Years later an avid hiker complained of finding a coyote killed in a trap in the upper City Creek meadows, which seems stupid and tragic.

For years there was a canyon wren in City Creek, "accidental" this far north, identified by its cascading song. Further up there are hermit thrushes, lazuli buntings, towhees, grosbeaks, yellow warblers, other unknown songbirds in the brush around springs; dippers bob in the stream, I saw a kingfisher dive down and pull a fish from the beaver pond; moose, elk, and this year, a black bear. I once saw a bobcat in the snow, sitting on its haunches, with tufted ears. For an urban canyon three blocks from one of the tallest buildings in Salt Lake City, City Creek is surprisingly wild. I haven't made it yet to the cirque below Grandview Peak at the top of the canyon—who knows what might be up there?