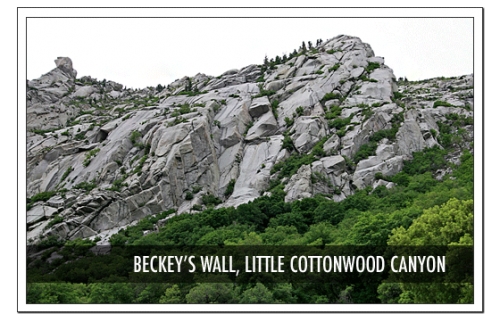 Near the great mouth of Little Cottonwood Canyon, there's a route—ostensibly an easy one—one of the single most popular and consistently highly-rated climbs in the world. It's called Beckey's Wall, but it's named for a guy named Fred. Fred Beckey. He didn't die there. He just climbed up it first.

It's a three-pitch climb, meaning you climb the length of the rope, about fifty meters, set up a new belay station, climb another rope length, set up another belay station, and then you finish and rapell off. It's all very commando-chic. You get to use all the nifty gear, harnesses, and carabiners that make you feel like a special forces soldier. You get to act like it's no big deal—this ascending vertical faces of rock with nothing but will power, muscle, and hubris—nothing but glorified nuts, bolts and a string to save your life. You get to use the lingo, too, and act like it's no big deal. If you take a big fall—and don't die—you say That was a whipper! If you take a big fall and do die, if any one is willing to talk about it, you say he cratered. You call the gear you use to anchor the rope protection, or pro. If the placement for the pro is good, you say it's bomber. It's decidedly a boy's language.

When I reached my friend Travis, belaying me from above on Beckey's Wall, it was cool and shaded where he was suspended, but I could see his face was shiny with sweat—the cold kind that beads on your forehead, hanging in anticipation on the prow of your eyebrows until it suddenly pitches itself down over your eyes.

He adjusted the rope in his ATC. I had forgotten the fact that not only was he suspended from whatever it was he was clipped to, but all of my weight was on it as well.

"The set-up," he said. He tried to swallow. He blinked. "Yeah, the set-up is—well I would call it marginal."

I hadn't pegged Travis for a wordsmith, but he used a poet's precision when he came up with "marginal." It too lacked the childish gregariousness of most other climbing lingo.

"The issue," he said, "is not so much whether it'll hold us now. The issue is what happens if I take a lead fall when I'm trying to place the next piece of gear."

We talked it over briefly and decided the wise thing to do would be to back off and leave the climb for a day when we felt more like one of the supposed thousands of folks who have climbed this route before and determined that it was just a lovely little Sunday stroll. Fred Beckey, who pioneered this route, supposedly would do it drunk, in the dark, and in hiking boots.

Two weeks later, the piton blew, and a different pair of climbers died, nothing but a margin—like the tiny little white buffer around this story—separating them from us.