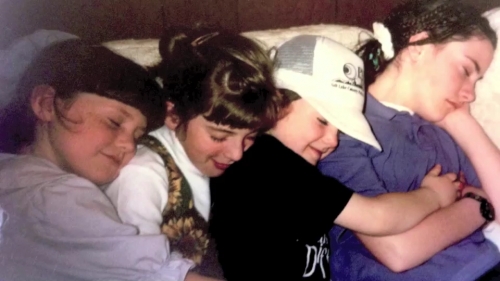 As a young girl growing up in California, Michelle knew nothing outside of her family. While she talked to her younger sister, and mimicked her idolized older siblings, nothing came out in legible words. At first her mother thought it was cute, but eventually realized that basic words never came to Michelle. After a while, Michelle's mom took her to the doctors where hearing tests revealed that she had a major hearing loss in both ears. The doctor set Michelle up with hearing aids and information on schools that could help her learn. These schools had specialists who could help students with hearing impairment. The problem her mom found with these programs, however, is that hearing impaired children were included with other kids with physical and mental handicaps, which meant that Michelle's problems might not be specifically treated.  The speech specialists also came to the school only for a couple hours a week, which meant Michelle would be on her own most of the time. Her mother wanted something to change and, around this same time, her husband’s employment started winding down. Michelle’s parents decided to move back to their original hometown in the Salt Lake Valley. It wasn’t until the family moved to Sandy, that they met a neighbor with a deaf son. Through them, they quickly learned that Utah has whole schools that cater to the needs of those that are deaf and blind. Michelle thrived in the mainstream programed they offered. She wanted to hear and speak like her siblings and the school allowed her to do so. Michelle’s day involved spending the morning with other deaf students, then the afternoon in a hearing classroom with an interpreter. After two years of this she progressed enough to be fully mainstreamed into hearing classrooms. Michelle has gone on to graduate high school, getting accepted to a hearing university, and being blessed with a family. “If it wasn’t for the special education program at Oakwood, I probably wouldn’t have done as well in life as I have,” she says of her childhood now.