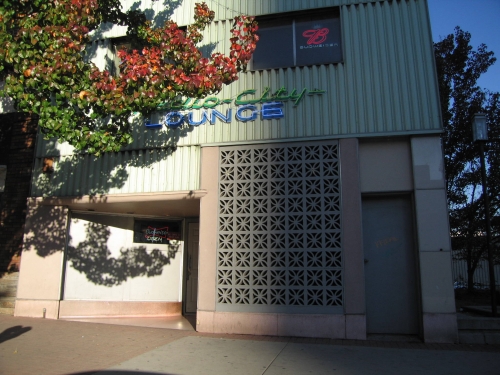 With this map I've located the businesses and public spaces that catered to the gay community in Salt Lake City during the 1970s, the decade when the Gay Rights movement began to make inroads nationally and locally. Of course, Salt Lake has always had a gay community; there have always been human beings in Utah who formed intimate relationships with members of the same sex in their righteous longing for love, companionship, and happiness. Unlike other larger port cities, Salt Lake has long been isolated, which resulted in a different growth pattern; indeed, the settlers who arrived in the 19th century considered isolation a virtue. Yet the central location of Utah and Salt Lake led to the region eventually becoming known as "the Crossroads of the West" implying movement and migration of many people from various backgrounds and life experience into the state. Undoubtedly, many of the men and women who arrived in the 19th and 20th century had same-sex partners and same-sex erotic experiences. The history of sexuality, the American West, and the rise of the Gay Rights Movement is what I study in graduate school at the University of Utah.

Post World War II, two bars of particular interest opened in the downtown business district of Salt Lake City. These bars, the Radio City Lounge on State Street opened in 1948 and the Crystal Lounge across the street opened in 1951. Both catered to a gay clientele, although neither could technically be considered a gay bar. Radio City owners appreciated the business from the gay community but forbid any activity, such as handholding or same-sex dancing, that might provoke the authorities. Douglass A Winkler wrote in his PhD dissertation Lavender Sons of Zion: A History of the Gay Men in Salt Lake City, 1950-1979 that "it is difficult to determine precisely when either establishment attracted gays in sufficient numbers to quality as a gay bar. By most accounts, the process evolved gradually as increasing gay patronage transformed straight bars into mixed or exclusively gay settings."

As the suburbs began to grow post-World War II, the downtown residential population decreased. During business hours, the city bustled with activity from the men and women who commuted in from the suburbs to work, but at the close of business, most people who remained downtown were single men. Thus during the day Radio City Lounge and
the Crystal Lounge attracted a heterosexual crowd, but during the evening hours they appealed to the gay community who lived in closer proximity. The Radio City Lounge survived until 2009 when it finally met the wrecking ball.

Most of the other bars, bookstores, and other meeting places have been closed or more accurately demolished, and in their place, large-scale mega block projects and parking lots have vanquished any trace of what once occupied the space. Most notable is the development on the block where the Energy Solutions Arena now stands. Construction of this arena demolished three gay bars in addition to the first gay community center in Salt Lake City.

In a future project I plan to map out the locations of these same businesses and public spaces in Salt Lake during the 1980s, 1990s, and 2000s to better visualize the changing landscape of the gay community.

Salt Lake may be a small town compared to New York or San Francisco, but that doesn't mean it doesn't have a gay history. Given the dominant religion and political views, the story of gay Salt Lake and the struggles for equality is even more fascinating. In fact to me, it is exhilarating.