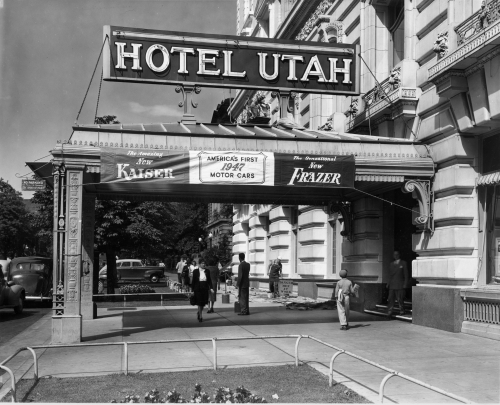 Roy was on his knees at the keyhole in his Hotel Utah room.

He wore white boxers, but was otherwise naked.

“The opening is at nine, Mr. Rogers,” I said, trying to hurry him.

He looked up at me with those narrow blue eyes. “There’s a bathroom that adjoins my room.  There’s a woman in there.  I can see her cootie.” He gave that famous smile which puckered the corners of his eyes.

Back he went to the keyhole.

My childhood hero was dissolving like a lump of sugar under hot water.

The night before we’d had dinner together after I picked him up at the airport.

“I understand the guys that own the franchise are Mormon.”

“Good people, Mormons.  Patriotic people.  You don’t see many protestors in Utah, do you?”

“They should let the army handle protestors. Better, the marines. We’re Americans and we need to stand up for our country.”

He pulled on stretch pants with pushed each foot into a stirrup that held them taut. Then went on the ornate red cowboy boots.  He pulled on a Western shirt, white satin, with lyre designs above the snap-button pockets. Then he tied a bandanna at his throat.

They greeted him with applause at the fast food restaurant on 21st South.