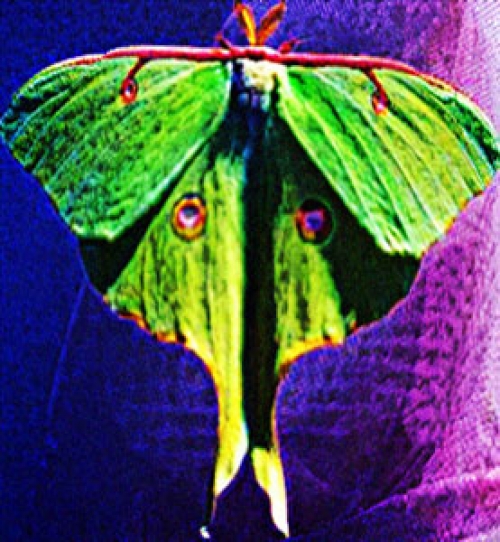 My students speak twenty-nine languages: Javanese, Kikuya, Navajo, Farsi. They come from: Kosovo, Cambodia, Belize, Zimbabwe—Laos, Rwanda, Estonia, Uruguay. They have survived malaria and tuberculosis, influenza, dengue fever. They have lived beyond earthquake and famine, fire and flood, drought and tsunami. My children at the literacy center have witnessed what they will never understand: their own people murdering one another.

They have stories to tell, but language fails them.

Together we have painted a mural that circles the room: night into day, rainforest to desert, up to the white Himalayas, down to the blue-green ocean. A wide river runs through it all, bringing us here together. Everywhere you look you find another tiny face: poison arrow frog, coiled cobra, pink flamingo, Chihuahuan raven—black baboons and golden lemurs—scarlet ibis, vervet monkeys—a tortoise swimming in the sand, an owl that looks prehistoric—leopard, lion, fallow deer, fish flying in the treetops—a luna moth with no mouth, one sweet-smiling camel. Behind every stone and tree, another almost human child appears as shadow, ready to flee in fear or leap out and kill you.

Last week, two nine-year-old girls and one small boy who survived a fire in their school in Guadalajara came prepared to dance, because they said, We have no words to tell it.

They were only children wearing bicycle helmets, little firefighters with flashlights, illuminating our stunned faces one by one—tiny dancers finding sacks of flour, using all their strength to lift the bodies of their friends and carry them outside to weeping parents—three sad survivors crawling down hallways, choking on an illusion of smoke, discovering one slumped teacher who might live if only they could drag her out together.

They wanted us to witness their grief, to feel the weight of loss in their little bodies, the weightlessness of love for the dead who come as smoke and air, who are forever with us. They cradled the sacks or lifted them to their shoulders. They gave us hope in the face of despair: they believed to the end of time that they might find one child crouched in the dark, blinded by fear and flame, still miraculously breathing.

They gave me faith: their silent bodies said, All things by love are possible. I saw through the veil of smoke: you and you and I—all who have known harm, all who have given grief, all who have touched terror—might dance our story one day so that each could see what the other suffered. We might let our bodies speak the truth, and take turns carrying one another.