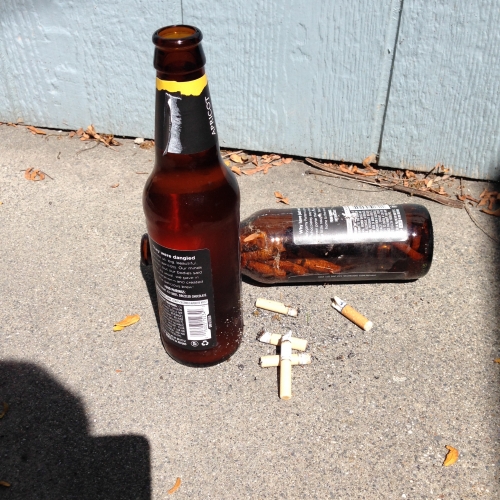 It feels wrong to be standing in the middle of the street drinking beer. I’m shoulder-pressed close by complete strangers as Sublime’s “Wrong Way” blasts out of someone’s car.

The cigarette, pressed between her lips/ but I’m staring at her tits it’s the wrong way…

I look over my shoulder, staring down the entry to the cul-de-sac, looking for the police that I’m certain will be barreling around the corner at any moment. The threat of an underage drinking ticket may be in the past for me now, but I’m certain that the sea of flesh flowing up and down the road contains more minors than the few faces I know.

I’d come over to the house that Chris, Ambsace, and Jake were now renting for an evening of board games and beer, but the front room of their new place had eddied out into the flow of the party in the road over time. When Jake won the game of Settlers of Catan we followed the other roommates and guests outside onto the porch. The explosion of sound made my head swim, the feeling not helped by the rickety wobbling of the cheap two-by-fours under my shoes. I recognize some of the people out in the road, friends of friends, half-strangers from other parties across the valley. A face I don’t know grabs me by the hand and drags me into a dance circle as the music melts the crowd into a new whole.

One edge of the crowd starts to cheer, spreading in a wave across the various circling swirls of babbling nonsense that fills the street. It takes my alcohol soaked brain a moment to place Chris’s girlfriend, Megan, and her best friend Autumn standing on the balcony of the neighbor’s house. I stare, blank and tired, as the two girls make out for the second-hand titillation of the drunken males roaring their approval in the road below. A new song starts, and the attention of the mass switches to an enthusiastic, if off-key, rendition of Metallica’s “Nothing Else Matters” to drown out the actual music beneath of a new roar of companionship. The two girls, robbed of the attention that was obviously, rightfully theirs, start flashing from the rooftops to regain their lost adoration.

I wander into someone else’s home. The mountain of cheap beer cans that has been stacked onto the bent window seat beckons me forward, breaking the veneer of awkwardness that normally keeps me from talking,  Several hours pass as I discuss faux-philosophic concepts with a rotating cast of alcoholics–in-training on the roof of a house that I’d not seen before that afternoon. The flat taste of Pabst-Hi-Lite barely washes away the ashen clog of stolen Pall Mall cigarettes that my new friend Billy assures me “Hemingway used to smoke all the time, down in the Caribbean.”

The next week I stop by for a supposed study session with Jake and Chris. I’m still getting used to Ambsace, the unknown name rolling awkward across my tongue as I say hello. Jake later explains to me that the word means the smallest remaining unit when you take a derivative, or the smallest amount that isn’t zero. He and Chris think it is clever, explaining to me that Ambsace had been in an accident on a motorcycle when he lived in Canada that had granted a very generous settlement. I glance over at him, lying flat on his stomach on the floor of the kitchen, his head tucked into the pantry where he stored his overpowered computer. He was the one paying for the cable internet line, the better to play whatever the latest game of the year was being hyped.

Later, when we’re both drunk, Ambsace reveals that the only people that call him Justin anymore are his parents and lawyers. He’s living in “Utah, of all fuckin’ places” sleeping on a couch and storing his ragged possessions in a kitchen closet because no one will hire him or rent anything to him after years of poor credit choices. Despite having many thousands of dollars in his bank account, irresponsible behavior poisoned his options for paying for anything that requires regular installments instead of lump sums. I get used to stepping over his prone form to raid the fridge for more beer, or pass by the bundle of blankets where he lays in the center of on the couch at two in the afternoon when I swing by after class.

I don’t know who put the hole through the wall at the foot of the stairs. It hadn’t been there that first night, and months later it seemed to just appear. No one mentioned it specifically, passing by the ragged break in the drywall silently on their way to the bathroom beyond or the ragged set of couches upstairs where the stoners would sit passing joints until they passed out. The mockery that erupted when I would refuse to toke only subsided when I explained my job did drug testing. A sea of sad sighs passed around, while someone muttered “fuckin’ managers” to a chorus of general assent. The scorn for authority was nearly ubiquitous among the houses lining the small road. When it came time to pay the bills the most responsible of the roommates would cajole the others into paying their shares, although the identity of that reliable person would shift between Jake and Chris monthly. The muttered cries of “Bullshit!” and “Fascist!” would subside for three-and-a-half weeks until the cycle restarted with someone different in the driver’s seat.

Chris really wanted the stairs on the back porch repaired, but was worried that calling the landlord would lead to awkward questions about the mélange of weed smoke and spilled beer that permeated the air. He shouldn’t have been worried, when Billy implied that the landlord was his dealer it became clear why he didn’t ask too many questions. As long as the rent check cleared and the police stopped asking questions beyond the obvious when they caught someone, the landlord didn’t care what people were doing on any of the properties he owned along the road. The small repairs piled up around the rented house, and one day I watched him work at fixing up the house beyond the fence after the tenants melted away to another part of town. When new renters came to survey the little lot the next afternoon they seemed happy enough.

In the morning after another drunken bender I watch a young father walk out to his car. I vaguely knew of the guy, a mechanic who would fix whatever problems the mismatched collection of cars along the road developed, as long as the parts were provided and a six-pack of beer was waiting. Billy said he was waiting until he went piece-rate at his garage to move somewhere nicer. I knew even less about his wife, only enough to wave at her as I walk back to my car nursing my hangover. She would sit, eyes dull as her cigarette flared bright in the morning air, vaguely rocking the carrier at her foot as she waited on the porch for her husband to come home. In the evening they would share enough time for a meal before she would make her way to an entry level food service job for a graveyard shift, switching care of the child between the two as they both dreamed of a brighter future. I wonder if their dreams were alike.

The McDonalds across the street was a regular source of food and employment for many of the young kids I met living along Hawkes Court. The owner of the gas station next to the McDonalds must have loved the amount of beer that flowed across Second South in twenty-four-can cases all hours they were legally sold, whichever brand was on sale that night being preferred. Those cases fueled the late night arguments that regularly erupted between the straight edge punks and their new vegan fuck buddies over exactly when Metallica began to suck. The anime Cowboy Bebop played before the drunken mass of strangers in the living room as the two guys by the open fridge arguing over subbed versus dubbed missed their favorite scenes.

It was an awkward day when Chris and Ambsace finally had the argument that had been bubbling under the surface for months. Ambsace felt that paying anything for the right to a closet and a spot on the couch was bullshit. Chris was tired of leading his girlfriend past the increasingly foul-smelling couch to the bedroom in the loft, the only bedroom that had a lock on the door. After finding out Jake and Chris had already lined up a new roommate who would actually pay his rent and use the third bedroom Ambsace packed his bags before asking if I could hold onto his computer for a few days while he talked with Autumn about moving into her apartment. It was two weeks before her yellow Volkswagen pulled up to my apartment, Ambsace nowhere in sight, to carry off his careless pile of clothes and carefully crated electronics back to their new basement rental. As I lowered the box into the backseat of the car she explained how her bitch of a roommate didn’t want Justin sleeping at their place without paying either, so she had moved out to a new place with him while he applied for a job.

Years pass, and one day I walk by my wife’s computer when a familiar face flashes across the screen. I peer past her shoulder to see the post about the undeniable dangers of eating meat from Chris. The post after the strange yet known face triggers recognition, when I suddenly see both Autumn’s and Megan’s picture suspended together.