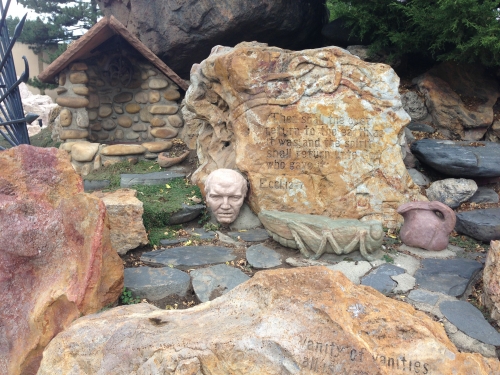 We drank Rainier, we drank Coors Lite, the Silver Bullet. Regular Coors, the Banquet Beer, or Mickey's Big Mouths, if someone's cousin had driven to Wyoming. We skated through Trolley Square, the back hallways, chased by security guards. We swung by Domino's and tried to explain we were the guys who got the leftover pizza. Late at night we ate pancakes at the Village Inn, nervous about the policemen who sat nearby.

Most everywhere in Salt Lake City, there's a church parking lot, and through that parking lot there always some adventure or other. This was the early eighties, the mid-eighties. Sometimes we had a hose and funnel sticking out of our backpacks, pieces of the beer bong. Our skateboards were huge, named for our idols who lived in California.

This parking lot was off Fourth South, west of Seventh East. Past the Chuck-a-Rama all you could eat buffet, near the Wonderbread Factory Outlet—always it smelled of bread, and we were always hungry in that darkness, late at night. The thick white bread smell filled us up, raised us up as we bent down the tall chainlink fence, as we climbed up and jumped down, landing with our backpacks bouncing up to clock the backs of our heads.

We landed in another world: Gilgal.

We were a little scared, slightly reverent. We also didn't want to make noise, didn't want to get caught. This was a fenced in, overgrown kind of garden, hidden in the middle of the block. We didn't understand the history, didn't follow it, didn't have to. We felt the strangeness. Saw in the moonlight the sculptures—the stone head, almost hidden in the bushes, the stones with their Mormon inscriptions. Silently we filed around a sacrificial altar, under an arch of stones. Here was a Sphinx with the face of Joseph Smith (one of us said it looked like Orin Hatch, but it was the first prophet), here the stone hearts in their own cave and the stone legs and arms strewn all around, here the swords beaten into ploughshares.

This was one man's vision, and he was a man who worked stone using his own infernal methods, blowtorching it into shape; here he was, the image of him, standing in his pants made of red bricks, his heavy, round head. We climbed up next to him, tried to hold on. We congratulated him for being even crazier than we were.

And then there was a sound, voice in a house, a light turned on, a dog barking, and we were scrambling on all fours, through the underbrush, up over the fence and throwing our boards down in the parking lot, shooting away through the bread in the air, the diners inside the Chuck-a-Rama buffet as our shadowy forms slid past the windows.

Later, only a few years later, once I decided to be a writer—mostly a question of delusional pretension, not talent—I remembered that place. I returned to it, I sneaked in, I even talked to people in broad daylight. I learned the history. The garden was the work of a devout Mormon, Thomas Bartlesby Childs, Jr, a mason with a vision.

"Can I create a sanctuary or atmosphere in my yard," he said, "that will shut out fear and keep one's mind young and alert to the last, no matter how perilous the times?" His garden was a testament to his faith, and to his trade. Years and years he toiled, all through the mid-twentieth century. A bishop to the ward that adjoined the garden, he'd hoped that the LDS church would recognize his testimony, and might even take over ownership of the garden. He tried again and again. But it was just too strange, too odd, not in line with how the Church wanted to represent itself. The church elders refused to even come and take a look.

I tried to write a story about Gilgal, once, and failed. I wasn't up to it, didn't have the skills that Childs had, the true belief and obsession that I could get inside. One day I might. For now, all I can do is admire him. And never forget those high school days, all those nights when our young and alert minds, our trespassing minds vibrated with reverence in the atmosphere he created, using a blowtorch on stone.

In the time since I've left SLC, Gilgal has become a public park and really cleaned up. Always worth a visit, it is at 749 East 500 South and can be found on the web (take the interactive tour!) at www.gilgalgarden.org.